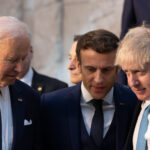 At an emergency NATO summit in Brussels on Thursday, US President Joe Biden said that the defence alliance had “never been more united” even though Russia’s Vladimir Putin was counting on dissension among its members over his invasion of Ukraine, according to Euronews. Biden commented, “Putin is getting exactly the opposite of what he intended to have since going into Ukraine.”

Among his remarks when addressing the media, the US President said if Russia used chemical weapons there would be a response corresponding to the nature of their use, that new US sanctions will target 400 people and entities, including members of the Russian Duma, and that he had told China’s President Xi Jinping that any help for Russia would severely jeopardise Sino-American economic relations, writes the BBC.

In their meeting on Thursday, NATO leaders agreed to bolster defences on the alliance’s “eastern flank”, Al Jazeera reports. A joint statement following their emergency summit writes, “In response to Russia’s actions, we have activated NATO’s defence plans, deployed elements of the NATO Response Force, and placed 40,000 troops on our eastern flank.”

Additionally, NATO will deploy multinational battlegroups to Bulgaria, Hungary, Romania and Slovakia, as confirmed by Secretary-General Jens Stoltenberg, who explained “On land, there will be substantially more forces in the Eastern part of the alliance at a higher state of readiness. In the air, more jets will be deployed, and at sea, there will be carrier strike groups, submarines and combat ships on a persistent basis.”

In his video address to NATO, Ukraine’s President Volodymyr Zelensky thanked members for the defensive weapons they’ve provided, but also asked them for increased military support against Russia “without restrictions”, the BBC reported. “The alliance can once more prevent the death of Ukrainians from Russian strikes, from Russian occupation, by giving us all the weapons we need,” he appealed. Zelensky predicted Russia would next target other NATO members like Poland and the Baltic States, wrote Reuters.