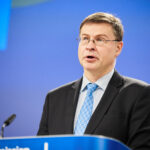 On Wednesday, the European Commission proposed a so-called “anti-coercion measure”. It would give the European Union the ability to push back – using punitive sanctions against individuals, companies or countries – when they use their power or influence to try and sway EU policy. The rationale behind the measure is that occasionally trade with the EU has been weaponized for geopolitical purposes.

Some of the proposed punishments include tariffs, quotas and restricting access to markets within the EU, among others. Such sanctions could only be blocked by a majority of member states whose ability to veto them on their own would be limited.

In a series of Tweets regarding the proposal, European Commissioner for Trade Valdis Dombrovskis wrote: “In recent years, EU & Member States have been the targets of economic intimidation. We need the right tools to tackle these types of threats head-on.”

Mr Dombrovskis gave the example of a dispute between Lithuania, a member state, and China, which recently de-listed the small Baltic state from the Chinese customs regime due to Vilnius having allowed Taiwan to open a de facto embassy in Lithuania. Such a case could trigger the EU’s anti-coercion measure, he said.

“This tool would send a clear EU message: We won’t accept interference in our sovereignty, nor intimidation tactics jeopardising key policies,” Dombrovskis wrote.  “It would help us respond to the geopolitical challenges of the next decades.”