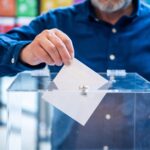 The newly-formed centrist “We Continue the Change” (PP) party won the elections in Bulgaria on Sunday, according to initial data. PP, which ran on an anti-corruption platform, gained almost 26% of the votes, ahead of former prime minister Boyko Borrisov’s ruling GERB party on just over 20%, according to a “poll of polls” that aggregated the exit polls of Gallup, Alpha Research, Market Links and Trend.

PP, founded two months ago by two Bulgarian Harvard University graduates, may now be in a position to take the country out of months of political limbo that followed inconclusive election results in April and July. “Bulgaria is taking a new path,” said PP co-leader Kiril Petkov, who has been serving as economy minister in the interim government. Now the party will enter coalition talks, which are expected to take several weeks.

For the first time, Bulgarian parliamentary election ballots also included presidential candidates. According to exit polling, President Rumen Radev garnered around 49% of the vote and looks set to proceed to a two-candidate runoff vote for the five-year mandate, most likely against the GERB-backed Anastas Gerdjikov, who received around 21%, according to the exit polls.